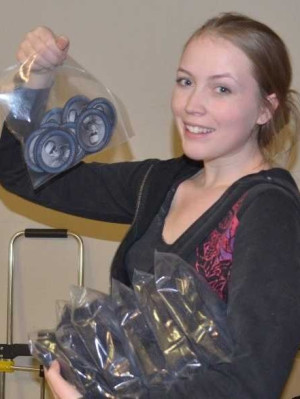 Cite: Following is Peto’s story that has been published on BusinessInsider

Peto grew up with four siblings and a single mom in California. Her mom didn’t have any help and had to borrow a lot of money. So Peto started working young.

Two years ago, Peto was working at a Subway when she found out she got a scholarship for a college backpacking science trip. She asked her boss at Subway if she could have time off for the trip. Peto’s boss told her if she took the time off, she wouldn’t have a job when she came back. Peto went on the backpacking trip anyway. When she came back, she needed a new job. But instead of working for someone else again, she decided to use $3,000 she saved up to buy a car to start a company.

One of Peto’s hobbies was going to a big field and playing a game called “airsoft.” In airsoft, the players divide into teams and shoot soft pellets at each other. It’s like paintball but not as messy. Peto liked to paint her airsoft guns with camouflage patterns. Eventually, other players at her local airsoft field noticed and asked if she could paint their guns too. Peto had found a small business where she could be her own boss. She went out and bought a bunch of equipment, including stencils. But several months of painting, Peto realized it wasn’t profitable enough to continue. So she switched it up, and started using the equipment she’d purchased to make other products – vinyl patches, tactical tees, and gun decals. She started selling these products online through a shop called MutinousCreations.com. Around this time, Peto graduated from high school. Then her mom moved across the country for work. Peto decided to stay in California because that’s where the airsoft industry is located. But that meant she was “essentially homeless” for a while – living on friends couches and contributing to their rent as best she could.

Peto went through some tough times starting her business.

In December 2012, she got sick but refused to go see a doctor. She was too busy working. She ended up in the hospital for a week, with a $10,000 bill to pay at the end. (“I have insurance but it sucks,” she says.) She realized she had to change her store name when it dawned on her that MutinousCreations.com was “obviously horrible” — “hard to read, spell, pronounce and understand.” She picked a new name: Mutiny Shop.

“It was tough starting over in SEO but worth it,” she says.

Slowly, though, Mutiny Shop started to get traction. Peto says that 2013 sales were in the six figures, and that she now employs two people. One big reason for Mutiny Shop’s success is marketing through Facebook and Google.

Peto markets MutinyShop.com through a Facebook page. She gets “likes” for it by giving away products and buying ads. She likes Facebook ads because how well she can target specific customers.

“Our main market is airsoft and paintball, so I can only have ads shown to people who have liked an airsoft page or added it to their interests.”

“Facebook has become a huge part of many peoples lives,” she says. “They have over a billion users, half of whom check Facebook on a daily basis. Many consistent users in one place. For this reason, marketing on Facebook is less expensive than any other website we have tried. The ROI is a lot higher.”

Two years after using the $3,000 she’d saved to buy a car, Peto now drives an $800 car. She plans to buy a Toyota Corrolla as soon as she gets her 2013 tax returns. “I haven’t been able to prove my income to the banks to get a loan! Apparently PayPal invoices and bank statements aren’t enough.” Cite: The following interview was done by a Local Success staff member. We’d like to send our words of appreciation to Ms. Abrianna Peto for sharing her great insight with us.

So Peto, what was the biggest problem of the journey to your success today?

Biggest problem has always been keeping up with demand. We are constantly growing so the moment we can handle the volume of orders we have, we already need to be bigger, better, more efficient. We manufacture our products in house, so it’s all on me and my team. We don’t have anyone on the outside to help us when it get’s rough.

The business could grow ten-fold overnight and to the outsiders, it’s a great success worth celebrating; but for those who involve –it is also a big challenge. Who are your main target audience and what is your future goal to serve them better?

On top of the shooting and service industries (military, police, fire, etc) our other target market is airsoft and paintball. Our major goal right now is to be able to meet the demands of large companies who need thousands or tens of thousands of patches made. Our other goal is to be a household name in these industries.

Success brings more responsibility, but of course it also has the good side. So, does making more money change you in anyway? How do you feel being in control of your own income now ?

Financially my life has been completely transformed over the past two years.

I worked in the fast food industry for 6 years making minimum wage.. It’s crazy to go from living the lower class pay-check-to-pay-check life style to the upper middle class. After taxes, I don’t feel like there is much a difference between upper-middle class and “rich”. My goal has never been to be rich, just to feel secure. I have that right now and it feels awesome. I have always been frugal, I still don’t spend much money on “personal luxuries”. I save all my money so I can invest into the business if needed.

Now before we wrap up our little conversation here, I’d like to ask you one last question. What is your philosophy of life, or perhaps is there an advice you’d want to share with the audience of Local Success ?

The only logical thing to be upset at is yourself. You can’t change much else.

For example, I want to blame the customer for ordering incorrectly or the employee for doing something wrong. But in reality it will always be my fault. The ordering sheet was misleading. The employee didn’t have clear enough instructions. Even if something seems like common sense, it doesn’t matter. All problems are preventable. I am the owner, I have to take responsibility, make it right, and keep it from happening in the future. That’s what entrepreneurs do, it’s challenging, but it gives me the control to build a wonderful company!

Visit Peto’s online shop to find out more about her business and support Peto in her journey to success. Perhaps you could also learn a thing or two from Peto to start your own journey!