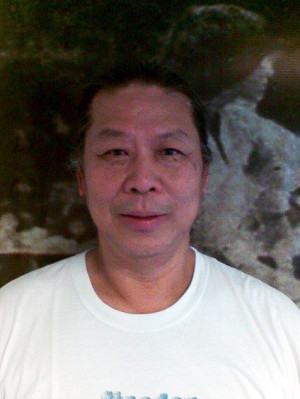 Master Jimmy Heow started learning Kung Fu when he was at the age of eight. All his family members practice Kung Fu, as Kung Fu was the talk of the town during that period of time.

Everybody in the his neighborhood practice at least a form of Kung Fu. Master Jimmy Heow’s uncle, Chin Lik Keong introduced him to a few masters around the neighborhood. That’s where his journey begins.

Other martial arts he has learnt are:

After settling down in Malaysia, he began to spread the art among the Chinese community here. In addition, Master Jimmy Heow trained with his uncle, Chin Lik Keong to refine his skills from time to time. Master Jimmy Heow was also being taught and given some points by Master Lee Tian Kim on Ru Yi Bagua (如意八卦).

His first fight was with a Thai Boxer in the year 1974. This was the first time in the ring that they introduced rules with boxing gloves and the use of ointment. The fight didn’t proceed. They are not used to wearing gloves and the opponent are covered with oil. Thereafter, they adapted and start to train with gloves, etc.

The most memorable fight happened in the year 1980. Master Jimmy Heow’s opponent is tall and he got long, strong arms. In Chinese kung fu, particularly in the external route, the determinant of success is a pair of strong forearms – “Kiu Sao” (桥手). Master Jimmy won the fight because his defense was strong. Master Jimmy Heow stopped teaching in 1990 and went into business. Also, that was the year his cousin brother, Sam Chin migrated to the United States. In 2006, he decided to come out and spread the art again and set up the Jimmy Heow I Liq Chuan Academy Malaysia. I Liq Chuan is a very unique art. Even now, there are still people coming from overseas to learn and understand I Liq Chuan.

As times have changed, besides offering traditional martial arts classes, he also teaches sports push hands and Sanda with the focus in competition. As for another group, He concentrate on the forms and some basic exercises for health preservation and improvement. Also, in martial arts, Master Jimmy Heow will always try to cultivate and foster unity among the martial arts community and welcome those who martial artists from various backgrounds to come and train with the academy.

When Master Jimmy first started, training is more like the hard styles as compared to the later years. The system Fung Yang Xing Yi Quan (凤阳形意拳) and Ru Yi Bagua (如意八卦) taught them not to give their opponents any chance when they touch their hands. “Once touch, either stick to the opponent’s hands, guarding him closely, or issue energy and that guy will fly off. People train differently back in the old days. Now, it is more sports oriented.”

Now, the training is based on physical sensitivity and sensorial mind awareness – not thinking of any techniques for dealing with particular situations. It is an art of unifying the mind and body of an individual. There are a set of basic movements and only two forms in the system to cultivate ‘chi’ and for health preservation. Other than that, the students practice sticky or spinning hands for sensitivity and applications. Master Jimmy Heow stressed on understanding of “Liq Hok” (力学) – the use of force using body mechanics to control the opponents.